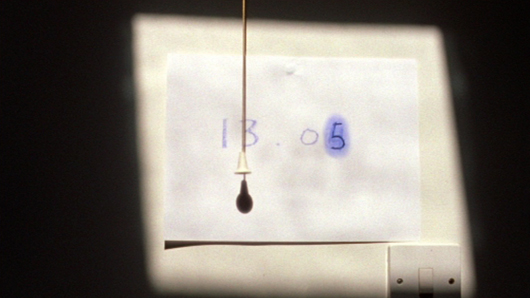 The vivid pastoral scenes and colour screens in Time:Distance, oscillate between tapestry-like detail and abstraction, where film and digital subclips intersect and imitate. Marking a series of competing material transitions, temporal and spatial distance elide: the house, the London marathon televised in the background, the churchyard with its graves and locals coalesce into a microcosm. The hand-chalked clocking of the sun and the pendulous swing of near-by church bells juxtapose physicality with decimal accuracy as attached to the ‘time:distance’ scale of a race – instead suggesting a bodily sense of observed duration through the use of a wind-up camera. Made with her family, the film is a playfully dreamlike episode of being, capturing the fragmented communications, audio collage and presences exchanged while filming in an ageing rural England.